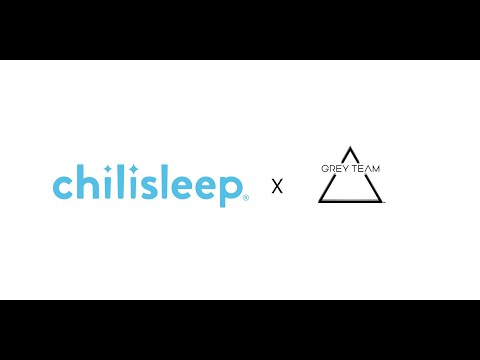 Happy Veterans Day!! The Grey Team and ChiliSleep experienced some technical issues during our scheduled Tuesday live at 1pm. We apologize for any inconvenience this caused. We would like to give a very special thank you to our veterans, you are deeply appreciated, seen, and valued!! We hope you enjoy this recording of The Grey Team x ChiliSleep live and see how sleep can dramatically improve a plethora of things, including mental health! The winners have also been announced in this recording and we want to say CONGRATS 🎉 Robyn McCullem and Trevor Becker, you deserve it and so much more!! Giving the gift of sleep to our treasured veterans is such a joy. Please enjoy this veterans day, and know that both The Grey Team and ChiliSleep care about you! 🙌

Become a ChiliSleeper! Sleep better and be your best self! Create your own temperature sleep recipe using our hydro-powered sleep solutions at

About ChiliSleep™:
ChiliSleep™ is a sleep technology brand that optimizes health and wellness through clinically researched and drug-free sleep therapies to improve sleep quality. As the original inventors of the world’s first hydro-powered, temperature-regulated sleep system, ChiliSleep is revolutionizing the way the world sleeps. ChiliSleep’s award-winning sleep solutions Cube™ and OOLER® consistently outperform the competition in the cooling/warming mattress topper category.

That all of us went through To become a warrior but there is no Course For you to decelerate back into a Civilian it’s it’s never even been Thought of and so now That’s why we have this suicide rate Because how do we undo that how do we Make you unsee the things you’ve seen And how do you undo the things that You’ve done yeah and it you know i think You and i have talked about it it falls Outside everyone sort of when i have Conversations about veterans everyone’s Like well the va takes care of them Right and you know i think it’s really Indicative of of healthcare today is you Know if it’s an obvious you know broken Arm or broken leg or prosthetic yeah the Va does do that part but the mental Health of these people the the ongoing Sort of physical wellness falls outside Of that guideline and that protocol and That’s really where In my opinion anyway great team is doing An amazing job of kind of being that Catch-all part being that course on on How to train you to be well because as You said what is defined as being Amazing Outside of the civilian world is not Amazing once you’re back in the u.s it’s Considered everything you’re doing is Wrong and what does that do to your

The video as well Well it’s a great question i appreciate You bringing that up so great team is 100 Supported just by the community uh we’re The only Nationwide non-profit that is not funded By the federal government in any way Shape or form So it’s it’s companies like you that are Responsible and patriotic as well as Communities And individual donors that keep us Afloat and Allow us to continue our mission So if anybody is interested in Contributing to gray team or helping us In any way whether that’s offering Products or services Or financial help They can go to greyteam.org that’s G-r-e-y-t-e-a-m-o-r-g And uh right there they can donate there They can donate on facebook they can Donate on instagram uh what have you uh They can certainly even send in an Old-fashioned written check and with a Stamp on it that i think is still Acceptable by the post office That’s awesome yeah and i i do that’s a Huge a huge shout out because it is it’s It’s a really worthy cause you guys got To see a tour of their facility um again What they’re what you guys are doing is

The All New Hiber-AI – Improve Your Sleep While You Sleep

The All New Dock Pro™ Sleep System – How It Works | ChiliSleep